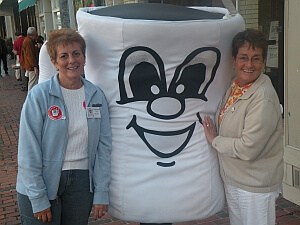 Moe Java was born on June 18th, 2006, when he first appeared at the NH Magazine ‘Best Of’ Party at the Verizon Wireless Center in Manchester. Moe has enjoyed a fun, coffee-frenzied childhood. As a mascot, he is often found where large gatherings of caffeine-deprived, fun-loving people are having a party or function. Moe is a well mannered, family guy and is very good with children. Check out his pictures in the Red Arrow Facebook page photo albums and follow Moe’s travels throughout New Hampshire!

Moe Java has become so well known when out and about at local events that we had to hire the highest level of a security guard to stand by his side. Back in 2007, we hired Kyle Trumble, a recent Central Graduate, to be Moe’s security! He is actively involved in theatre and is a waiter at The Red Arrow Diner. Look for him anywhere you see Moe Java!

If you would like Moe at your next function or party, please contact Tyler Isabelle at 603-748-4303 or tyler@MoeJava.com to inquire about Moe’s availability. Appearance rates are reasonable and affordable. Call now to have Moe Java appear at your next event and be the talk of the town!