NEW YORK, Sept. 10, 2015 /PRNewswire/ — Today SiriusXM announced that it will take over the iconic Red Arrow Diner in New Hampshire for a two-day event beginning the day before the first primary, which is currently scheduled for February 9th. The flagship Manchester location – a go-to place for presidential candidates on the campaign trail – will be renamed the “SiriusXM Red Arrow Diner” and be a broadcast home for SiriusXM political channels, including Patriot (125) and Progress (127). 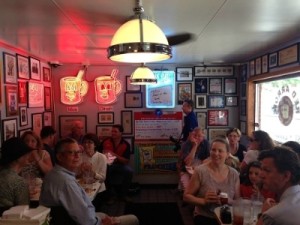 In addition to offering presidential candidates from both sides of the aisle a chance to break both news and bread, the SiriusXM political team will provide insight into the key moments of the campaign, before locals cast their ballots. SiriusXM will also welcome “everyday” New Hampshire citizens and visitors into the diner, allowing them a chance to hear directly from the presidential hopefuls about the issues that matter most to them.

As part of this Red Arrow takeover event, SiriusXM listeners will have the opportunity to participate in vibrant political discussions during live broadcasts with SiriusXM talk hosts and their special guests. Listeners in attendance will also be treated to a complimentary meal selected from a specially-designed “SiriusXM Red Arrow Diner New Hampshire Primary Menu.”

“The atmosphere at The Red Arrow Diner represents the very spirit of New Hampshire politics,” said Dave Gorab, Vice President and General Manager, Talk Programming for SiriusXM. “Over bacon, eggs, and politics, SiriusXM listeners coast to coast will feel the energy and excitement of the New Hampshire primary firsthand.”

“We look forward to having our loyal customers join us at ‘The SiriusXM Red Arrow Diner’ during the New Hampshire primary as SiriusXM brings its diverse array of political programming to our classic diner,” said Carol Lawrence, President of the Red Arrow Diner. “We’re excited to open our doors, create a special menu, and even invite SiriusXM hosts to step behind the griddle and prepare breakfast for a fan or two!”

Read more of this press release at SiriusXM