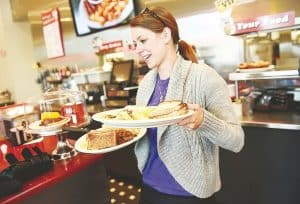 Mickayla High of Pembroke was on the move with a party’s order at the new Red Arrow diner in Concord on Thursday. (DAVID LANE/UNION LEADER)

Red Arrow Diner’s Concord location opened July 14th, at 112 Loudon Road. Our new location was well received by the Concord community, even staying busy at 3:00am the first Saturday night! Concord is our largest location yet with 92 seats, surpassing Red Arrow Diner Milford and Londonderry which both seat 72 customers each.

According to the Union Leader the Red Arrow Diner isn’t the only Manchester area restaurant to expand in new locations this year. Our Manchester location neighbors, Gauchos Churrascaria Brazilian Steak House, opened Suzette Crepes & Waffles, July 13th, in the vacant space next door. Gauchos is also planning to open another Brazilian steak house in Nashua later this year. The Cooper Door of Bedford also has plans to open a location in Salem NH later this year!

Come visit us at the our brand new Concord location and keep an eye on all of our Manchester area neighbors while they expand as well!