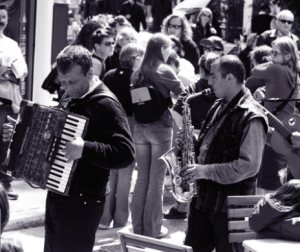 Several restaurant owners in Manchester, NH (est. pop. 110,448), have banded together to produce events, cross-promote each other, and explore the savings of purchasing as a group. NH EATS is the brainchild of Carol Lawrence, owner of the Red Arrow Diner Franchise.

“She has always felt that collaboration was key in order for downtown to be very vibrant and offer lots of options,” says Ami D’Amelio, founder and owner of marketing company Just Flow. Lawrence, D’Amelio, and one other restaurant owner first discussed the concept of working together to capture more customers via cross-marketing, and then rolled it out to other potential NH EATS members. The effort was dubbed NH EATS rather than Manchester EATS with an eye toward taking the initiative statewide eventually.