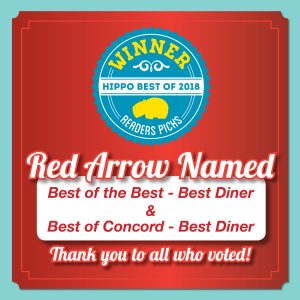 Thanks to your diner-iffic votes, Red Arrow Diner was selected as a recipient of not one but TWO Hippo Best of 2018 Awards:

Each year, Hippo Press asks its southern and central New Hampshire readers to vote on everything their regions have to offer. The contest shows what Hippo Press readers value most about their communities. As it turns out, many readers are quite passionate about restaurants! The contest received hundreds and hundreds of votes in its Best Restaurant category. Red Arrow Diner is honored to have won in two of the Best Diner categories and could not have done it without your support!

We are thrilled to be named one of best by Hippo Press for the fifth consecutive year!

Click here to view a listing of all of the winners of the 2018 Hippo Best of Awards.
Scroll Up