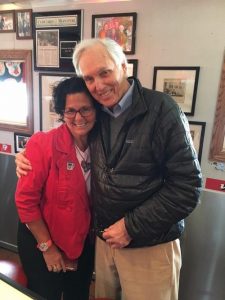 The Red Arrow Diner first opened its doors in Manchester, New Hampshire back in 1922. When Carol Lawrence, owner of Red Arrow Diner, bought the restaurant on Lowell Street 31 years ago, she knew she was buying a piece of Manchester history. This article in the Union Leader discusses Carol’s plan to begin a legacy video project that captures the stories of those who were there at the start of the famous eatery.

The video will include stories and memories from folks such as Ray Lamontagne, the son of the diner’s original owners, Dave and Mabel Lamontagne. Once complete, fans can find the video on the Red Arrow Diner website. We are excited to capture pieces of Red Arrow history on film and share it with our wonderful diners!