The Red Arrow Diner is dedicated to providing safe dining. Click here to read our preventative measures in response to COVID-19.
Jamie Lemay: Part of a Diner-iffic Family 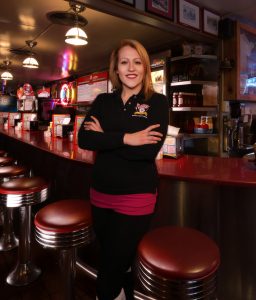 Working at the Red Arrow Diner never seemed like just a job to Jamie Lemay, who began working as a third-shift server at the diner’s flagship Manchester, New Hampshire location in 2012. In fact, Jamie embraced the late-night crowd and never-boring atmosphere at the beloved diner. Her love for her job was evident in the positive attitude, admirable work ethic and consistent enthusiasm she brought to each of her shifts. In January of 2015, Jamie’s professional attributes led to her promotion to General Manager.

Jamie’s role as General Manager of the historical Manchester location included managing employee scheduling, maintaining food and supply orders, regularly interacting with customers to assure the food and service was to their liking, and working closely with servers, cooks and other staff to make sure company procedures were being followed. Her hard work and success as a general manager led to her recent promotion to District Manager.

As District Manager, Jamie will be responsible for maintaining consistency throughout each of the diner’s locations and will work closely with general managers to assure company policies and procedures are being met. She will also have a part in monitoring the diner’s budgets and expenditures. The position is brand new to Red Arrow Diner, and Jamie is excited for the opportunity to make this role her own and become a leader within a company she considers a second home.

Jamie began her career in the hospitality industry as a host in a chain restaurant for five years before she began bartending at a Nashua banquet facility. She was recruited by a former Red Arrow Diner general manager to work at the diner as a third-shift server and then began her tenure at the Manchester landmark.

Jamie’s management roles made her realize how much of an extended family she has at the Red Arrow Diner. She loves working with owners George Lawrence and Carol Lawrence as well as Chief Operations Officer Amanda Wihby. Jamie is excited for this new opportunity and appreciates that her new role is, in ways, a lot like her start as a third-shift server six years ago.

“I love that every day at the Red Arrow Diner is different,” said Jamie Lemay. “This line of work is nothing like a typical office job. I’m always traveling to one of our diners and enjoy my time with employees and customers. I’ve met so many interesting and wonderful people on this journey. I’m grateful to work for George and Carol, who I learn so much from every day.”

Jamie currently lives in Nashua with her fiancé and their five children. She is very involved in her kids’ lives and enjoys spending time with her family.

Click here to see Jamie’s promotion showcased in the February 2018 edition of the NH Lodging and Restaurant Association’s The Dish.